Kendall Woman Back on Her Feet After Year-Long Recovery 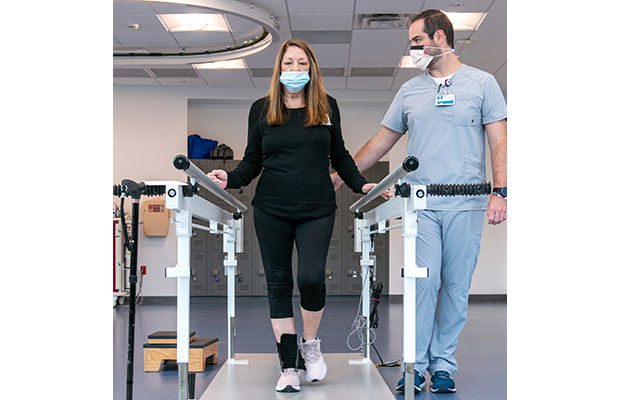 As Cassandra was getting ready to leave her house and head to work one day last September, the 68-year-old fell down the stairs and suffered a catastrophic injury.

“It happened in the blink of an eye,” she said. “I can’t remember how I fell. I was standing at the top step, and then suddenly, I was on the ground in unimaginable pain.”

Home alone, she laid on the floor, drifting in and out of consciousness, unable to call for help or move to reach for a phone.

It wasn’t until six hours later that her husband, Chris, returned home from the restaurant, where he had been smoking ribs for the week ahead.

He discovered a horrific scene: Cassandra laying on the ground, immobile, in a pool of her own blood. Chris frantically called 911.

Fire rescue carefully lifted Cassandra onto a stretcher. Her nose was broken and her face was covered in bruises. They rushed her to Ryder Trauma Center at Jackson South Medical Center.

A CT scan confirmed that Cassandra had a broken neck and an incomplete spinal cord injury. She was assessed by Ian Cote, MD, a UHealth – University of Miami Health System neurosurgeon who specializes in spine surgery at Ryder Trauma at Jackson South.

“She was in a lot of pain, incredibly weak, and couldn’t move either one of her hands or her right leg,” Dr. Cote said.

To alleviate the pressure of her spinal cord, Dr. Cote performed a complex cervical fusion surgery. This type of traumatic injury is rare, and if her medical team had not acted as expeditiously as they did, Cassandra risked permanent paralysis.

“When Cassandra came to the trauma unit, she had incomplete paralysis in her upper and lower extremities,” Dr. Cote said. “But the surgery went great, and her body responded well to the procedure.”

Following the successful surgery, Cassandra required physical rehabilitation to help her get back on her feet. She chose Christine E. Lynn Rehabilitation Center for The Miami Project to Cure Paralysis at UHealth/Jackson Memorial for its state-of-the-art facility, expert medical team, and commitment to including family in the patient’s rehabilitation and recovery process.

During her six weeks at Lynn Rehabilitation Center, Cassandra underwent intense physical and occupational therapies to relearn how to use the right side of her body. In occupational therapy, her therapists incorporated her love for calligraphy into her daily exercises as a way to work on fine motor skills in her right hand, while her physical therapy focused on helping her regain strength in her right leg.

“Cassandra had a positive attitude and was driven to get better,” said Oliver Acosta, MD, a physical medicine and rehabilitation physician who cared for her. “Our goal at inpatient rehab was to build her back up to help her regain a sense of independence.”

She was discharged just before Christmas and was able to spend the holidays at home with her family.

After completing her outpatient physical and occupational therapy at Lynn Rehabilitation Center, Cassandra was thrilled with how much progress she made. She has regained most of the function in her right hand and is still working on regaining all of the strength in her right leg.

Most importantly, she’s been able to go back to work and continuing managing her restaurant.

“I’m so thankful for the staff at Jackson South and at Lynn Rehab,” Cassandra said. “All of my doctors and nurses were phenomenal throughout my recovery process. I wouldn’t have progressed as quickly as I did if I didn’t have an incredible surgeon and if I wasn’t receiving great care at Lynn Rehab.”